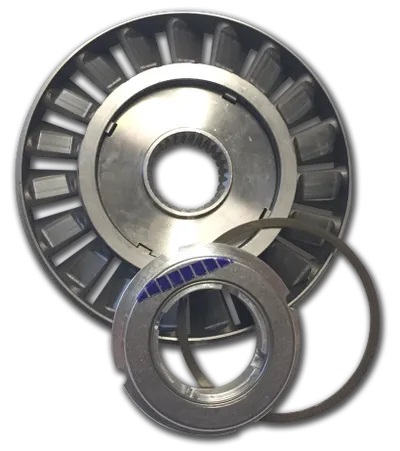 The Only Technology for Today's Converters

With the New Age of Blowers, Turbo Charged and multiple shots of Nitrous, the choice of a spragless racing converter becomes increasingly clear. The higher the HP, the higher the probability that a sprag will fail. More importantly, it is now clear that a sprag has no influence on the stall speed of the converter.

Simply put, a sprag is a one way clutch, functioning just as a ratchet does in your toolbox. It is locking in one direction and freewheeling in the other direction. Every torque converter manufactured by OEMs has a sprag. A functioning sprag is very important for a street car making 100-200 HP and 500-3000 rpms.

Neither a sprag or spragless insert has any influence on converter stall speed. There are several factors necessary to achieve maximum MPH and consistent e.t. on every run. Most important of these is the proper fin angle, the right stator, the correct core size and a knowledgeable technician. Whether the converter is spragless or has a sprag, neither will influence the stall speed if the sprag is functioning properly. The problems all occur when the converter experiences sprag failure.

The sprag assemblies are often damaged during the initial tire shake as the racer goes through the burnout. The sprag is rapidly loaded and unloaded during the tire shake, causing the sprag to wear unevenly and eventually break. A worn sprag is actually worse than a broken sprag as the racer has no idea why the vehicle is so inconsistent and will spend countless hours checking everything but the converter. When the sprag eventually breaks, a racer will see the car slow down about .5 seconds and spend hundreds of dollars to repair the sprag until it cracks or breaks again.

Intermittent sprag slippage hurts Reaction Time and E.T. A sprag assembly that intermittently slips will usually not be apparent until you generate some heat in the tranny fluid. Often in the first few rounds, your reaction times seem okay, but get to the 3rd or 4th round and the vehicle reaction time falls off. Your 0.01 lite turns into a 0.04. This happens because your race car rolls through the stage beam slower, resulting in poor vehicle reaction time. When the sprag slips and allows the stator in the converter to spin, the converter “loads” the engine harder and the race car comes out of the stage beam slower. You can pull your hair out looking for answers but you can’t see the sprag failure. This can not occur with a “spragless” racing converter.

If the sprag in the stator of the converter slips on the shift change, the RPMs will fall back to something lower than the normal stall speed of the converter. For example, the RPM after a shift change will be 200-300 lower if the sprag is slipping. This will slow the E.T. .02-.03, plus a loss of MPH. A quality playback tach will show this problem.

“Spragless” Racing Converters are not slower, just more consistent. Over 15,000 spragless racing converters are out on the track and many are World, Division or Local Track Champions. Transmission Specialties now offers their spragless converter in 8”, 9”, 10”, and 10.5” to cover 400-2800 horsepower. The converter comes with a 90 day warranty that starts when you start the racing season and we offer free stall adjustments. If you are tired of sending your sprag converter back for repair, over and over, then let us offer a solution to take you out of your misery. We can take your sprag type converter and convert it to “spragless” for far less than a new converter or will custom build a new “spragless” converter for your exact stall requirements.

Very few racers are not familiar with the “pitfalls” of the sprag type converter. It has either happened to them or to a fellow racer. Transmission Specialties has converted hundreds of converters to “spragless” in 2007 and sold as many new. We now see many converter manufacturers are offering their version of the spragless converter. With 20 years experience building spragless racing converters for every combination, why take the chance sending your converter to a company “on the learning curve?”

The information on this website is for informational purposes only; it is deemed accurate but not guaranteed. It does not constitute professional advice. All information is subject to change at any time without notice. Contact us for complete details.